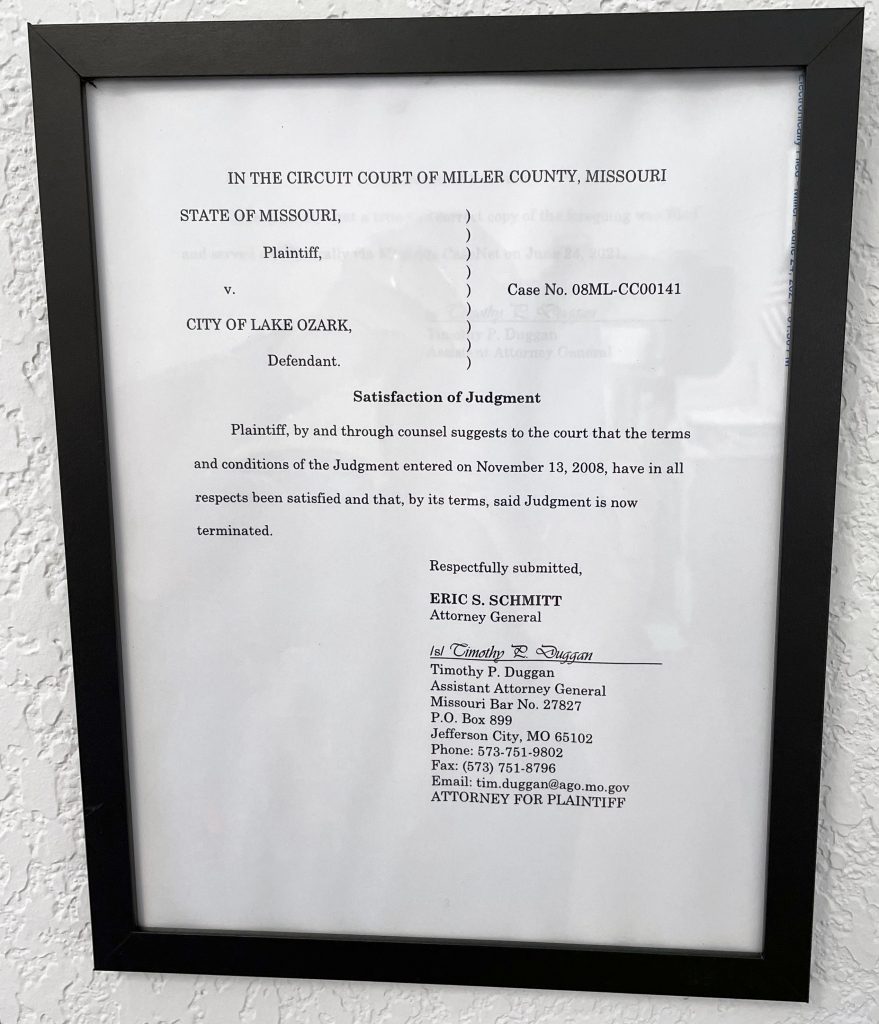 It’s been a long, sometimes challenging road to recovery, but the City of Lake Ozark has been released from a consent judgment resulting from a significant sewage spill more than a dozen years ago.

City officials were notified June 24 that a Satisfaction of Judgment had been filed with the Missouri Department of Natural Resources announcing that DNR would be closing its enforcement case.

“The past 13 years have required a lot of difficult work on the part of our staff, citizens and board of aldermen,” City Administrator Dave Van Dee said. “This resolution finally puts to bed the dark cloud that was hanging over Lake Ozark for so long, and we can now begin looking to the future.”

It all started in early September 2007 when the DNR was alerted by an individual that raw sewage was flowing into the lake. The DNR discovered that a lift station on Horseshoe Bend Parkway had failed and was allowing between 10,000 and 15,000 gallons of raw sewage to flow into the lake.

The DNR notified the city of the bypass and the city responded and stopped the flow but failed to conduct no clean up and provided no written notification of the bypass.

The city has between 300 and 400 grinder pumps and lift stations that serve the community. All of those had to be upgraded or replaced to meet a subsequent court order.

Then-Mayor Johnny Franzeskos and the board of aldermen took immediate action to mitigate the situation. McClure Engineering was hired to design and upgrade the system at a cost of about $3 million. Of that total, the city only borrowed $200,000 which was paid in full and ultimately impacted the city’s sewer budget.

“It was an awesome and sometimes arduous task,” Van Dee said. “The DNR and McClure Engineering worked together to guide us through the process. Two mayors, multiple aldermen and our staff were involved over the years and their quick action on various ordinances and work orders helped expedite the projects.”

Over the following decade, the city worked to make the mandated improvements, doing some of the work internally. Improvements include:

The final piece of the puzzle was the upgrade of Twin Oaks Lift Station on Twin Oak Drive, which was completed to the satisfaction of city officials and the DNR only recently. Its completion was delayed for about two years because the city could not obtain the needed easements from lift station neighbors. Eventually, the DNR, McClure Engineering and the public works staff designed an alternate way to access the lift station.

“It’s taken quite a while, but now we have a wastewater system in place that has the capacity to handle our anticipated growth,” Van Dee noted.

A year after the spill was reported, the public works director – who had been fired as a direct result of the mishap – pled guilty to failing to report the discharge of pollutants into the lake and was sentenced in U.S. District Court to three years of probation. The court also ordered the fired employee to pay a $5,000 fine.

In a separate but related case, the City of Lake Ozark plead guilty to repeatedly discharging raw, untreated sewage from several sewage collection stations directly into the Lake of the Ozarks. The discharges were from sewage overflows resulting from faulty equipment. The city was fined $50,000 by the DNR and $30,000 by the Environmental Protection Agency.