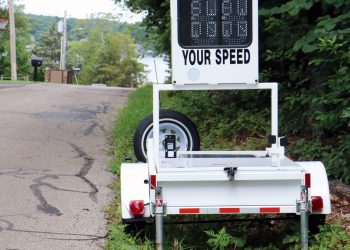 The private-public partnership concept is working well in the City of Lake Ozark.

Because a private citizen stepped forward, the Lake Ozark Police Department is now the proud owner of a mobile radar trailer.

Matt Wright, a local businessman and developer, approached the LOPD about the possibility of raising private funds to help purchase a mobile radar trailer to monitor traffic and encourage motorists to abide by the speed limit. Wright made the rounds among business owners and residents to raise funds to help cover the $9,800 cost of the demonstration unit.

Ultimately, Wright – who is also a Ward 3 alderman — was able to raise $6,000 which he turned over to the Lake Ozark Police Benevolent Association. The LOPD provided the balance of $3,899.

As a result, the board of aldermen voted unanimously Aug. 24 to approve use of LOPD funds for the purchase, which includes a one-year warranty.

Police Chief Gary Launderville told the board that the radar trailer is loaded with the types of features expected on a demo. The price of a new trailer is $15,000, but because it’s a demo unit MPH Industries agreed to sell it at a discount.

The LOPD has used the radar trailer for about two months, setting it up on better-traveled streets to discourage speeding.

“This helps with traffic enforcement and if we want to do traffic counts we can do that too,” the chief said. “It’s not just a radar trailer, and it’s certainly a positive for the city.”

Several aldermen said they’ve been warned by the flashing lights at various locations around the community.

“It has slowed the traffic, and that was the intent,” Chief Launderville said.

Wright said previously he was motivated to pursue a radar trailer after observing vehicles speeding on Valley Road during an event on Bagnell Dam Blvd., on School Road and other areas of the city.

Aldermen were unanimous in their congratulations to Wright.

A committee being formed to search for a new Lake Ozark city administrator is nearly complete.

Mayor Dennis Newberry told an interested individual attending the Aug. 24 regular board of aldermen meeting that he hopes to have the 12-member search committee filled soon.

“It’s in the process,” Mayor Newberry told the individual. “I don’t have it totally completed yet. I should have it filled in the next four or five days.”

The 12-member committee would be comprised of Lake Ozark residents, business owners and/or business managers, according to the mayor. He said he would not be a voting member of the group, but the committee would decide which candidate was the best fit for Lake Ozark and make its recommendation.

“I will simply be the messenger to bring that information to the board,” Newberry said.

He noted that Assistant City Administrator Harrison Fry, who is also the city’s economic development director, would be the only candidate guaranteed an in-person interview.

The individual made it clear to the mayor that he left his name at a previous meeting to be a volunteer on the committee. The mayor said he wasn’t aware of that and would consider the individual if a vacancy becomes available.