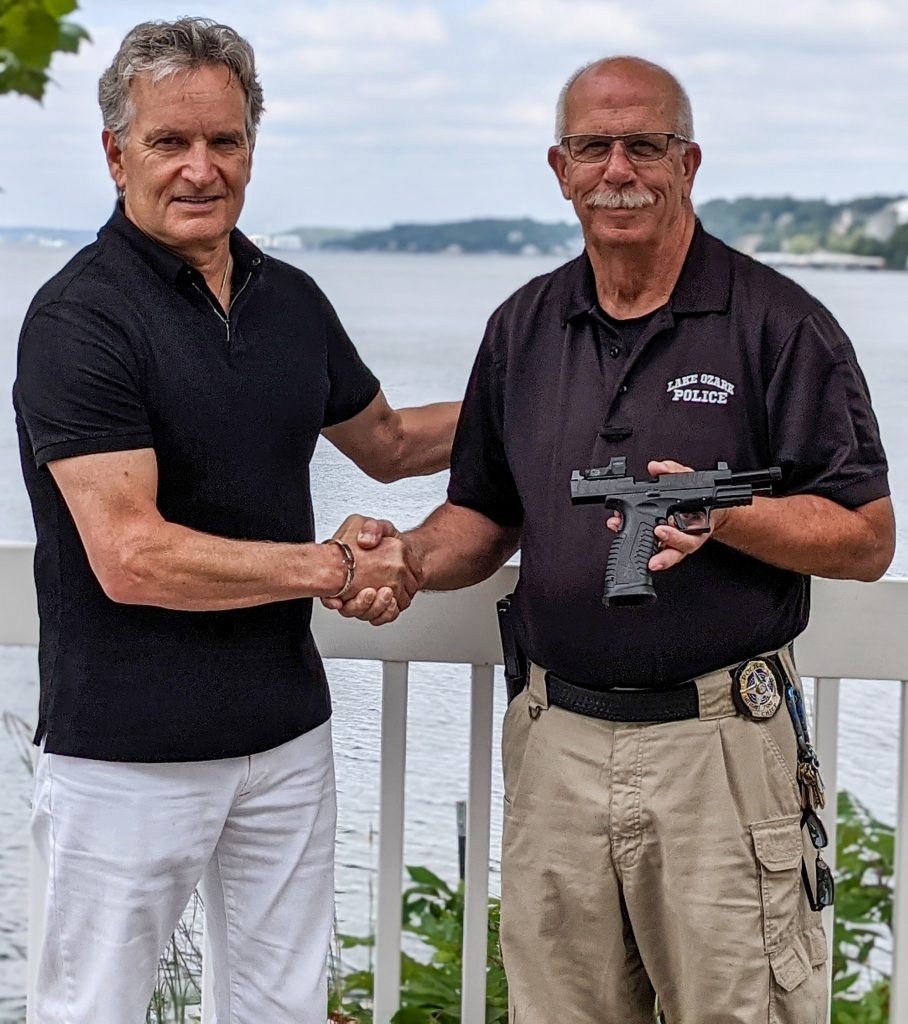 Springfield Armory is proud to announce the donation of guns and equipment to the City of Lake Ozark Police Department.

Spearheaded by Springfield Armory CEO Dennis Reese, this donation equips every officer of the Lake Ozark Police Department with the gear necessary to help ensure they can effectively perform their duties protecting its citizens.

Dennis Reese and his wife, Jane, have long-time ties and deep connections to the area, and are involved in the development of the historic Bagnell Dam Strip — known as “The Strip” to most.

“Lake of the Ozarks is a very important place to my family,” said Dennis Reese. “My wife Jane and I raised our kids here during the summers and throughout much of the off-season, so the area has a lot of great memories for us. We wanted to do our part giving back to the area, helping to protect The Strip for families to enjoy. When we found out that the Lake Ozark Police Department needed support, it was a no-brainer that Springfield Armory could be a solution.”

Additionally, the department acquired two SAINT® Victor B5 5.56mm rifles, also equipped with HEX Dragonfly red dot optics. This provides the officers with additional firepower should it be required in the course of their duties.

“When the Reese family learned that our department was looking to replace its current firearms, Dennis Reese reached out to me immediately,” said Lake Ozark Chief of Police Gary Launderville. “Our current firearms were nearly 15 years old and in need of replacement, but we did not have the budget to accomplish this. Mr. Reese determined what we needed and made it happen. He has been awesome.”

“Springfield Armory could not be more proud to support the Lake Ozark Police Department in their efforts to keep their community safe,” said Fred Mincks, Springfield Armory’s LE Sales Manager. “We support the efforts of the law enforcement community and are happy to have been able to do this for the Lake Ozark Police Department.”

In 1794, the original Springfield Armory began manufacturing muskets for the defense of our young, free Republic. The Armory functioned as a firearms supplier for every major American conflict until 1968 when the government sadly closed its doors. In 1974, nearly two centuries after its inception, Springfield Armory Inc. in Geneseo, Ill. revived the iconic heritage of the Armory to carry on its legacy.

We strive to honor this responsibility as guardians of the original Springfield Armory legacy by manufacturing the highest quality firearms to enable responsible citizens to preserve their right to keep and bear arms in the defense of life, liberty and the pursuit of happiness.

With an unmatched emphasis on craftsmanship, performance and exceptional customer service, our mission is to forge superior firearms and provide the tools necessary to defend individual freedoms and equality for those who embrace the rights and principles secured by our Founding Fathers.