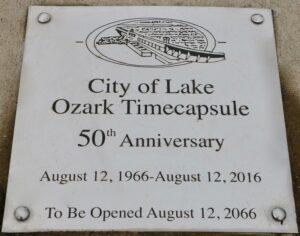 The Lake of the Ozarks was formed in 1931, but it wasn’t for another 35 years that the city of Lake Ozark was officially incorporated on Aug. 12, 1966.

LeRoy Snodgrass, a Tuscumbia attorney, presented a Petition for Incorporation to the Miller County Court asking that the City of Lake Ozark become an incorporated Fourth Class city in the state of Missouri.

The petition was signed by more than a majority of the taxable inhabitants of the proposed city. A special election of those electors was held Aug. 9, 1966, with 145 in favor and 13 against.

The court also ordered that Marion F. Clayton be appointed as mayor. Addeane Polidori, Bill Bassett, Frank Frandsen, Fran Frudeger, Burl A. Henderson and Walter Tietmeyer were appointed as the first board of aldermen.

Harold Brown was named the first marshal and W. W. Atteberry was the first collector.

Today, some 54 years later, the city of Lake Ozark is a progressive community of 1,586 residents based on the 2010 Census. Projections estimate the population has grown to 1,800 with the 2020 Census underway in the year.

The city celebrated its 50thanniversary in 2016 in fine fashion with a ceremony at the City Hall and burying of a time capsule that will be opened in 2066.